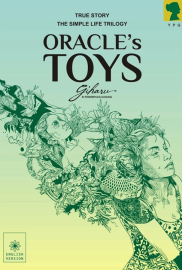 Giharu tried hard to carry on her marriage with Squal, a man whom she never loved. She did it for the love that she thought superior, for Oracle—her son, and for values she has confided in.

Squal, her husband gave tension everyday, spreading ‘fire’ that never goes out, in the name of love. Growing older, Oracle wished to know about the reason why he was born. Aside from love, is there another greater one?

Nothing wanted to hide, and yet, time prevents it. Before Oracle grew older, Giharu did not only seem to get older but also thought that she would die before her son recognized the reason of the choice she made. She was bewildered—a dilemma, and found herself in the state of tight spot, and dithered to tell him. Altogether with the mountains, she revealed the convolution caused by the thought of an assessment. It seems like reconstructing an old car: uninstalling all of its parts—trying to find the exemption of her soul, old dreams she wished to get again.

The reason is still a reason. Facing the fact that her son was deprived too much by her dreams that he never knew was a whip for her.

Yum has declared herself to follow Giharu all along her life. Yum, women of the mountain, and people of the hillside are the remnants of Giharu’s modernity that she is attempting to fuse in her dreams. 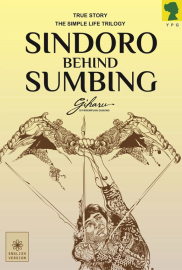 Not a little contribution; natural resistance of Giharu’s close people; her mother, Yap Sui Lien, her sister, JJ and her parents in law, Farida, and in the circumstance of those whose marriages are not based upon love, collaborated in Giharu’s mind. Would it be to fight the destiny or to follow the law of karma just as what JJ said?

Giharu studied furiously, worked furiously, and almost died managing her marriage. She aimed to find the third answer before making her decision. Unintentionally, she met ‘Man of Arc’ who extended it; seemed the answer was accepted then directly the essential questions debated it—a decision led to an allusion of ‘whose hand would Giharu die in’?

This is a love story of two mentalities, starting from a dream which seemed like an empty thirst laver longing for water. It generated and looked for bridge to connect those all, from restless spearhead until Temanggung where both Mountains Sindoro Sumbing sat—in the beginning of the tenth year a man standing an the edge of the hill looked for a ‘true love’, his finger pointed, his mouth said: look at Sindoro Sumbing!

That is how the soft self-discovery began. From that moment Giharu felt that there is something behind the mountain—a coming-home way and finding dreams as well as love within that man, trusting him as strong as Sindoro Sumbing, as fragrant as a rose. The man gives and Giharu receives, witnessed by a catfish, sengon trees and the woods.

The man is a man of arc, and he has another ‘chakra’. The arc is pitched, and Giharu ‘the arrow’ is darted reaching the bottom of heart where the mountain of eternal love is formed. 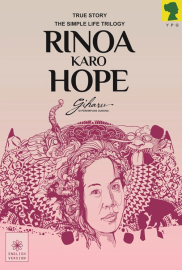 It is too premature to imagine that love and dream can be reached at once on a mountain.

An endless yearning to acquaint with someone who catch a mouse at her house, to be a mother of ‘life’, through rituals and processions in cultural ceremony and arts and the never-ending passion in her mind, out of the blue, Giharu realized how she had strode far from the goals.

For something that never dies, a discovery seems to be nothing—it fractures midway.

A displeasure is resolved by another displeasure. A reverse psychology is employed: starting with a mistake and hoping there will arrive the truth (?). Because half of her heart has died, and yet, her common sense keeps on moving outrageously, is irritated and confronts a makeup of life, and is open-minded to let the wickedness is assaulted by the goodness. It is to prove whether the decency always beats the evil.

And it is true that men’s, culture and mind are sheer, and Sindoro Sumbing are eternal.

All is not over yet. There are lots of works to do. A curly haired and brown skinned little girl always keeps the dreams, and she is whom Giharu bequeaths a new way of thinking and cultural system.